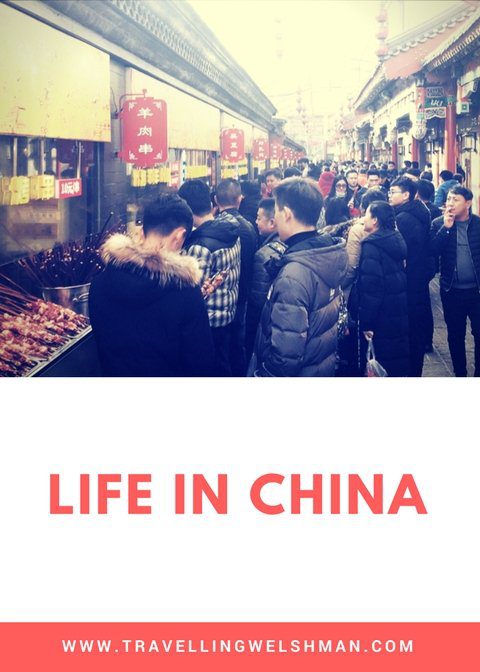 It’s fair to say that that I had no real idea what to expect of life in China. All I really had to go off were a few misinformed suggestions, second-hand stories and inaccurate stereotypes. However, nothing compares to dropping yourself there and seeing for yourself what the country’s about. Now that the initial dust of confusion has settled, I’ve noticed a few things I must get used to.

It’s fair to say that the Brits have a close relationship with the queue. From childhood we’re taught to stand in line politely behind the person in front. Well not in China. There is no queuing per-say; if there’s a gap left open, then someone will quickly squeeze in. This angers my internal Britishness to no end, however it seems to be a completely acceptable custom over here. There doesn’t seem to be any annoyance, not even a dirty look, it’s your fault for not closing the space.

This will occur pretty much anywhere you’re likely to find a crowd, particularly the hectic subways and supermarkets. The best advice (as unnatural as it seems) is to become a rude bastard yourself. Bump and barge your way through the crowds as they’re more than likely to do the same.

The presence of foreigners in China can be a difficult one to assess. You’ll have curious locals staring and smiling at the strange white man, something I’ve experienced before. You’ll also have evidence that they’re welcomed when certain tourist-areas have translated signs and even a few recognizable fast-food chains scattered across the city. Despite this it seems that China doesn’t 100% trust foreigners, and from day one they’ll keep a watchful eye on you throughout.

Firstly, it’s quite a difficult process just to get a visa, particularly if you have no help from someone in China to arrange it. As soon as you land, you’re put on the grid. Within 24 hours you must register the address of where you’re staying (unless you’re in a hotel where its done automatically). Even if you’re staying at a friend’s house, the police must know where you are at all times. This involves taking your passport as well as the housing contract of wherever you’re staying. Of course, some foreigners have lived here for many number of years without registering once, however if you happen to be asked by a policeman for your registration and you have nothing to give, then there’s trouble.

You should also have your passport on you at all times, as there are occasions where it will be needed. Being randomly stopped by police isn’t likely to happen, however occurrences have risen during the Spring Festival. There are also certain “checkpoints” in the city where you’ll have to pass through an airport security scanner. This mostly happens in touristy places such as Tiananmen Square. No passport, no passing.

Other milder examples would be the refusal of shops to sell a local SIM card to a tourist, for whatever reason. Another is you need your passport in order to buy something such as a kitchen knife. You get the sense that the Chinese are essentially saying “we’re watching you”.

Spit Your Heart Out

Sadly, this is one occasion when the ignorant and stereotypical actually got it right. In the UK, anyone who’d be disgusting enough to spit on the floor in public might be considered a chav or just a general scumbag. Well not here.

In much as coughing or sneezing is an acceptable action, gargling the inners of their stomachs and blasting onto the floors of China is the norm. Not that I have any authority to judge but fuck me its disgusting, you really can’t get used to it. Not only in the streets, the urge to phlegm becomes so powerful that the Chinese do it in staircases or in any place a bit more strict (i.e. the subways) they’ll do it into a trash can. When you’re passing an elderly gentleman (who isn’t aware that you’re there) and he spits across the street JUST as you’re passing him, then you truly get sick of this custom.

I Love the Smell of Pollution in the Morning

Before I arrived, I assumed that the whole smog and pollution drama was a bit of an over-reaction. However, after spending a few months in the city its possibly worst known for, I have to admit that it IS a problem. Admittedly, it changes on a daily basis; some days you’ll have pristine blue skies, and others where you can’t see the sky at all.

There are a few ways of determining how bad it is. The most reliable would be the AQI reading, which basically tells you how much shit is in the air on any given day. The most revealing however is simply seeing for yourself. For example, on a normal clear day I’m easily able to see buildings a street or two away in full detail. The next day, looking from the same spot you won’t be able to make out the skyscrapers on the other side of the street. It appears as a thick brownish hazy fog, which all you can think about it “I’m breathing this shit in”.

May sound completely ignorant, but in a lot of places around the world, you’re likely to find some level of English, mostly limited to a few key words. However, in China, there is practically no English whatsoever outside touristy areas. Life becomes a hell of a lot trickier on a day-to-day basis.

Not only is it a completely new language having no similarities whatsoever to English, but non-decipherable writing. This means even if you pick up a few words in conversation, it does you no good when it comes to reading it. Essentially this means you have to practically learn 2 new languages; listening/speaking Chinese and reading/writing Chinese, the latter of which is one hell of a challenge.

A problem you’re likely to find all over the Earth; a gullible fat-walleted tourist becomes easy pickings for crafty con-artists in every shape and form. China is no different, however it becomes easy to figure out given a bit of practice.

Linking to an earlier point, any extensive knowledge of English out of the blue should become suspicious. This is likely to happen in sight-seeing and touristy areas i.e. The Forbidden City is FULL of these. Their introductory line as they approach you is always the same:

“Hello, where are you from?” You hear these words then you can pretty much guarantee that they’re trying to rip you off. They’re attempting to befriend you, gain your trust, then invite you to the bar/restaurant/cafe that they work for where you’ll get charged an extortionate rate.

Another example is simply catering for the gullible tourist and feeding off their ignorance. The best example of this is the bug market. First and foremost, Chinese people don’t eat this shit, part of the reason all the market is confined to one short street. They look at the scorpions/snakes/lizards as bemused as you do. It’s simply made for tourists who don’t know any different and charge them a ridiculous rate for the privilege of eating something completely unauthentic.

They say in New York, you’re never more than 5 meters away from a rat. Well in Beijing you are never more than 10 meters from some form of security. They’re everywhere. Swarms of soldiers, policemen and menacing black trench coat wearing security will surround any public place. You’ll even find them within museums, protecting precious artefacts or buildings. You’re also likely to find one in your hotel and posted at the end of neighbourhood streets, regularly pacing through!

The amount of security in Beijing is insane! Even before you hop on the subway, you must pass through an airport-style security check. Baggage scanner, metal detectors and pat-downs, the whole deal. You’ll even find this on certain streets, such as the one surrounding Tiananmen square. Tourists will also have to provide a passport, where they’ll be sure to check that your visa is valid.

Some may consider it “oppressive”, not feeling completely comfortable with officers on every corner watching your every move. It can also get quite annoying having to go through the worst part of airport travel 6 times a day. However, in this day and age, such strict security measures don’t seem that stupid really. At the very least you have a welcome feeling of safety.

If You Look Official, You’re Official

Although the Chinese government does have a tough stance on anyone who argues against them, it appears that looking official seems more important. The sight of endless amounts of security/guards everywhere, from busy streets to specific buildings and even within neighbourhoods. However, on closer inspection these are older men sat in their chair half asleep or young teenagers on their phone.

Subways are also full of security, even requiring an airport security check. Although some subway stations might be stricter than others, generally you’ll see young uninterested security lazily waving the metal detector back and forth, their hearts aren’t really in the job. As oppressive and intimidating as the immense amount of security in China seems, on closer inspection you notice they’re mostly by jobless uninterested teens and the older gentlemen not quite ready for retirement.

Another example would be the endless amounts of non-smoking signs you’ll find practically everywhere in China. You’ll find them throughout the inside of buildings…placed above an ashtray and 3 men smoking around it. This isn’t to mention the fact that my employers are LYING and technically making me break Chinese law by illegally employing me, but no big deal. As long as you look official, then by god you’re official.

Blocked from the Western World

Another well known fact about China which turned out to be true is the number of Western sites that are blocked on the internet. Facebook, Youtube, Snapchat and all the rest are blocked. Thankfully and predictably there are ways around it. A VPN (Virtual Private Network) lets you access the internet as if you were back home so it hasn’t been that hard to cope with. The only negative is paying £100 a year for the privilege.

Without a doubt China was only 10% of what I’d imagined it would be. After being exposed to life in China for the past 4 months, the question is whether I’m happy with my decision. Obviously the differences in culture (big and small) takes getting used to, but its not the easiest adaptation. Personally I’ve had no issue with my new life here, however its not the type of place that you’d “retire in China”. This life isn’t for everyone, but it is for me.