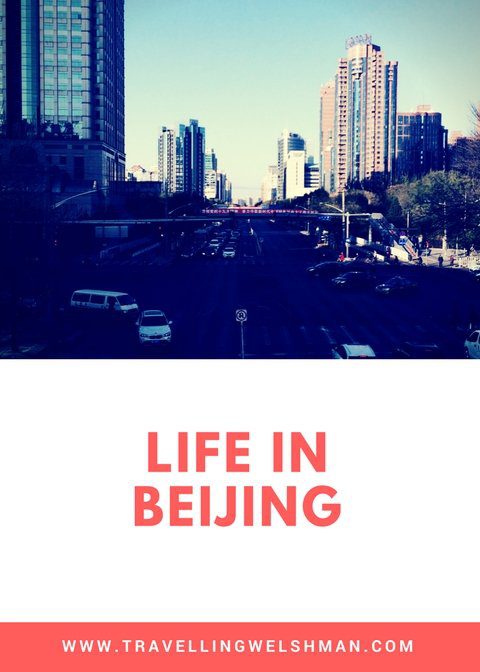 3 months after making the big move to Beijing, the initial cloud of culture shock (or smog) has finally settled, and life as a Beijinger has become the norm. As I sit in my very own hutong (traditional Chinese house) nestled among the stereotypical narrow streets across the way from the mighty Forbidden City right in the centre of Beijing, it’s time to reflect.

Naturally the differences from an enormous capital city and my home in bumfuck nowhere Wales are immense. Most culture shocks are simply down to just being in a big city. However, it’s the sight of a cart pulling donkey situated in-front of glass covered high rise buildings that keep you aware that its indeed China you’re living in. There are times where you just have to look at a situation and simply respond “That’s China”.

I was worried that Beijing would have been overrun by the modern age, and despite having a few new-age touches, the city still holds true to a past time. Outside the high-rise building you’ll find the hedgemazes of traditional streets wound in-between with people making a living out of carts of fruits, meats and street food. However, the best part of the old age must be the incredible amount of history wrapped snugly around the rest of the city. Sites such as the monstrous Forbidden City which along with Tiananmen Square dominates the centre of the city. The Great Wall, a wonder of the world is also a short trip away.

Cart-pulling Donkey in the middle of Beijing streets

Of course Beijing is a booming capital which also has all the modern touches you’d want. An endless amount of public transport, an incredibly efficient subway and all the designer shops you’d want. Beijing has money and it spends it wildly on any modern touches it can. THE most stunning thing to find for me was that they have running advertisements, INSIDE subway tunnels!! I don’t mean one billboard passed at a million MPH, they’re LCD screens, so the advert follows the train!

This could be a very harrow comment on unfairness of wealth distribution which is clearly evident. You’ll see the regular crowds of poor elders and seemingly rich youth. It appears that Beijing would like to outgrow the poor, however they hold strong in the hedge-mazes of traditional hutongs around the city.

The Phone is King

The Chinese are definitely on the same level when it comes to technology (in the sense they have the same stuff, not quality). You see clear examples of Chinese technology trying to keep-up and even exceed that of the West. They have their own named brands, and their own examples of tech that have been “inspired” by Western designs. Such as what appear to be Chinese hoverboards, but only consist of one wheel and two foot-rests on the side…

Anyway, the phone is no different. The void of facebook, twitter, youtube etc. (all banned) has been filled by an app called WeChat. Put simply, in China, if you don’t have WeChat, you’re a nobody. EVERYTHING is done on this app. Not only your regular messaging app, it also serves as your wallet. Where back in Britain, its still pretty revolutionary that someone pays for something by scanning their phone, not here. They’ve doing that shit for years son! Every store has a line of people on their phones scanning a QR code to pay. Even a man selling sweet potatoes out of his cart had an QR code hanging there! This app is used for everything, I even pay my rent over it.

It doesn’t stop there, there’s an App known as Alipay which is used for every service you can think of. It provides the platform to pay for everything you need in daily life and essentially all Western apps rolled into one. You can buy phone data, order a taxi, a takeaway, cinema tickets, rail cards, rent a bicycle and so on.

The Bug Market is Fake

“Uhh, they eat bugs over there don’t they?” well no, they don’t. The bug market is real, that’s no question, however its nothing more than a tourist trap. Strangely nestled down a back-alley from an incredible shoppers avenue lined with huge shopping malls, it looks out of place. Indeed there are stalls after stall, half of which sell your “normal” snack food, then the other half that sell insects and numerous questionable creatures to eat. Oh and you best believe they’re real, everything from spiders, scorpions, lizards, centipedes and seahorses. If you’re lucky you’ll be able to see them still kicking for life.

So what’s fake about it? You’ll notice two things: 1) There are a lot of Chinese people there who are NOT eating any of the creatures on offer, and taking as much pictures as you are of them 2) Once you do buy some, YOU become the tourist attraction. It’s the definition of the word tourist trap. The Chinese don’t eat this stuff, even they find it disgusting. Its made for gullible tourists to get fascinated at the “things that Chinese people eat” and pay an extortionate price for the privilege. Regardless, its still worth seeing just to marvel at the seemingly bizarre things they prepare.

Creatures of offer in the Bug Market

Its not too uncommon now in capital cities to see bicycles you can rent and leave in docking stations anywhere near. Beijing is no different, but they’ve taken it a step further. There seems to be several bike rental services, all recognised with different coloured bikes. Naturally, all this is done over the all-essential phone, where you scan a QR code on the back, the bike unlocks, and off you go. Its so simple and they can be found EVERYWHERE. The beauty of it is, you don’t need to dock it anywhere in particular, you simply leave it at the side of the street, close the lock and your trip is calculated.

It might just be a glitch, but it seems everytime I’ve rented a bike from a company called OFO, my trip as cost nothing. Regardless if I was charged or not, it’s a very handy aspect of Beijing life.

Put simply, it’s a see-saw. For some things you’re amazed at how cheap they seem to be, as long as you stay out of tourist traps. 5 gallons of water for less than £1, street snacks for 10p, 40p per subway ride. There are plenty of instances where life is cheap.

However another example of trying to be Western comes with Western prices, especially those luxuries such as drinking at bars, clothes, technology and a decent place to live etc. In these cases you’ll be paying just as much (if not more) than you were back home.

The equation is quite simple, the basics you need to survive (i.e. if you’re poor) are kept cheap, but any luxuries you can afford (i.e. if your rich) will be as expensive as usual.

This was probably the most surprising thing to find. Put simply, if you’re a foreigner, you get a free night out in clubs, no word of a lie. Free entry, and free drinks all night, your only expense is the cab ride home. Waiters regularly come to refresh full bottles of Grey Goose, Hennessey and champagne, all for nothing!! Its really confusing why you get such V.I.P treatment for nothing.

The smiles of a free night from a Serbian, South African, a Ukrainian, a Canadian, two Englishmen and a Welshman

Turns out its because I’m a foreigner. This what I’m told is the reason I’m such a valuable commodity when it comes to clubs. The equations simple:

Young foreigners will attract the Chinese youth, and along with them comes the rich older Chinese. Not very PC, but when you’re 3 bottles of Grey Goose deep, it doesn’t seem to matter.

10 minutes after arriving in my hotel room on my very first day, I notice that something had been slipped under my door. They were 3 business cards with some (let’s face it) very attractive Chinese women in little clothing and suggestive poses.

I had so many questions. Who passed these under my door? How did he/she get into the hotel in the first place? Does this always happen? Isn’t it illegal? Are they value for money?….

Few questions later to other ex-pats in the hotel I was quickly educated. Apparently male pimps walk around the hotels distributing cards for women they “employ”. When I questioned the fact how he was allowed into the hotel, the answer I got was “well…it’s a Chinese hotel…”

Maybe that was a stereotypical thing to say? However the fact that those cards slipped under my door on my very first night and every night after that, it began to make me suspicious. Not to mention the fact there are hotels in China known to run brothels from their basements. I also received a phone-call to my hotel room on multiple occasions asking such things as

There are many cities that could claim this title, but Beijing is fighting to be the worst. First off, most of the modern world recognises a red light as “stop”, not in Beijing. It’s just a matter of whether they want to stop or not, and which lane that light dictates to.

However the biggest threat are the lethal silent enemies, known as the electric scooters and bicycles. As they have their own lane next to the curb, they’re the first obstacle to overcome, and make for a devastating shock for anyone not paying attention.

They Chinese are also THE most inpatient drivers in the world. It’s incredible how little time they allow anyone to move on the road. If you don’t move immediately as the lights turn green, you’ll be deafened by roar of horns.

In a city of 22 million citizens, on most occasions you’ll find yourself surrounded by hordes of people, some of which barging their way through the crowds where others shuffle along at turtle pace with their faces buried in their phones. Without doubt this is THE most annoying aspect of Beijing life.

The subways become a horrendous experience on certain hours of the day and weekends. Unlike in Japan where a staff member will helpfully push the last few people into the subway, here the responsibility is left to the very willing Beijingers. People genuinely charge each other down in an attempt to board or depart the subway on time.

This experience is intensified by the Chinese people’s lack of personal space. You’ll repeatedly be leaned on or pushed against in a complete disregard. Supermarkets are packed to capacity with mile long lines for the tills. Without doubt the worst aspect of Beijing life, but to be fair, similar to any vastly populated city.

Life in Beijing is not the easiest, however its simply another way of life. Essentially Beijing has everything you’d need and want in a modern Capital, keeping its original foundations and deep culture. The poor and the rich are held in a relationship of sharing the city between them with unusual points of crossing over. It stand strong as a major capital city.