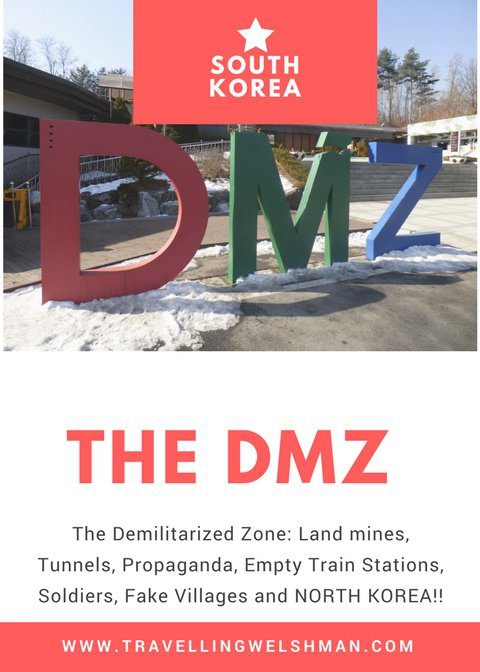 Backpacking follows a predictable set of events; first follow the well-beaten tracks, before seeking a unique adventure not many get to see. The DMZ (Demilitarized Zone) marks the fragile divide between the borders of both Korean countries. The heavily guarded separation between the two keeps the fragile illusion of peace while on the edge of a re-match 50 years down the line.

As dangerous as the DMZ may appear, regular bus full of tourists will still be shuffled around the mine-filled border. My tour was even booked from the hostel with a pick-up service for 46,000 won (£30). This was for the half day morning DMZ tour (the afternoon tour cost about 20,000 more) www.cosmojin.com . The tour included bus transfer there and back to Seoul with a tour guide, as well as visiting an underground tunnel built by the North Koreans, visiting the train station linked with the North, and a look across the border from an observatory.

The bus takes you all the way from Seoul, along the Freedom Road and across the Unification Bridge where you’ll have to pass a checkpoint after a South Korean soldier has checked your passport.

The entrance into the DMZ

Imjingak Park and The Unification Bridge

The first stop on the DMZ tour will be a visit to Imjingak Park which holds a number of statues and structures to commemorate the Korean War. One such enormous structure was an old train, which was found knocked off its rails and stuck in-between the war, still displaying its scars.

You’ll also be able to get a view of The Unification Bridge in the distance, with a few nationalistic displays scattered around.

Close-by you’ll also find a quite depressing looking theme park, suspiciously close to all the action. A simple explanation is that the park is easily in view from North Korea, and its all about showing off, a never ending propaganda battle.

This was pretty incredible. In total the South have discovered four tunnels dug from the North, the third of which you’re able to visit. At 26-stories underground, it’s a long steep walk with your yellow hard hat to the tunnel itself. At the bottom the tunnel stands at 160cms, which is tricky for a 200cm man to tackle. The whole group walked in single file through the precisely carved tunnel crawling closer and closer to the North. Throughout the journey you’ll find holes branded with yellow paint, which were marked for planting dynamite. Naturally they cant allow you to go all the way to the North. The furthest you’ll reach is 170 meters from the Northern border…underground. At the very end you’ll find barbed wire and 3 walls built by the South with a little window to let you see just that little bit further.

The experience was made all the more authentic when inexplicably a platoon of young South Korean soldiers in their authentic uniforms were travelling in the opposite direction to me through the tunnels. They seemed to just also be sight-seeing, but Needless to say it was easy to put yourself in the moment..

Sadly, no camera’s or phones were aloud in the tunnel.

It makes an experience 10 times more exciting when it begins with the words “We can only stay here for so long because it’s not 100% safe”. Seeing as the observatory naturally is in clear view of the North and “their weapons”. Regardless, this is one of the very few places and opportunities that you get to look into North Korea with your very own eyes. Well not much with your naked eye, but thankfully the binoculars provided or a powerful camera will show quite a lot.

The view from the Dora Observatory

One of the clearest things in view will be an incredibly large flag tower branding a North Korean flag. On the other side of a river (the official “border”) stands a smaller South Korean flag tower; evidence of a propaganda fight which they lost.

You might be surprised at first “wow there are a few towns and buildings, it’s not that bad”. On closer inspection, these towns are completely empty. The buildings are literal carbon copies of each other, completely void. These are fake villages, simply to make the North look prosperous from those trying to peek in.

However on the left hand side, there is an actual village…with actual people, going about their daily lives. This was arguably the most touching and spine-tingling moment. These were real genuine civilians of North Korea, and how surprising it was to see them just riding along on their bikes.

A genuine North Korean village with people as the black specs

If there’s ever an argument to spend that bit extra on a powerful camera, this was it. In the distance you’ll see the odd guard tower, and even a few soldiers with their military vehicles scattered about. How wise it is to take pictures of North Korean military positions however is another question altogether…

This one’s a bit bizarre; spooky but optimistic. Dorasan stands as the last station in South Korea, which is linked to the North. Regular trains could run between both countries from here potentially, however predictably they don’t. The railway and the train station itself was built more symbolically during the “good” times in their relationship. Its only use at the moment is a link between Seoul to bring tourists once a day.

May seem completely pointless building the whole thing or even visiting it, but it’s the sign above the terminal that explains the significance. Though is may not be used now, the hope is that some day this would be the regular station that links to Northern capital.

A very nice little addition was a commemorative stamp which would be used for your entry into the North. However it was highly recommended that you don’t put this stamp in your passport, as it would cause a hell of a lot of needless hassle for you on your future travels.

The tour lasted around 8 hours in all. This tour did NOT include a tour of the JSA (Joint Security Area), which is exact border between the countries which splits a series of shacks. Its these shacks you get to visit, in which you’d technically actually cross the border.

However, considering everything that’s included, it’s an incredible bargain. This is truly one of the rarest opportunities on Earth. When else will you be able to look into NORTH KOREA. I would of happily paid that amount just for the observatory, everything else was a nice bonus.